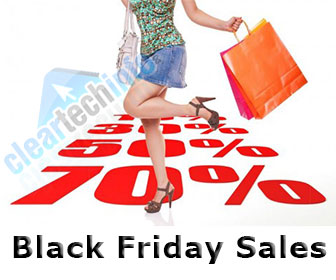 I have worked about 8 Black Fridays sales during my lifetime. Some of those years I was an employee at a national computer retail store and the other years I worked at several retail stores as kind of a sales representative for a major computer manufacturer. Black Friday sales can and will get really crazy with intense and sometimes overwhelming people traffic.

[adblockingdetector id=”2″]I have witnessed many things happening during the years I have worked Black Friday weekend sales. Customers literally fighting with each other over the last sale item in stock, commissioned employees fighting with each other over customers, customers and employees stealing from the store and (sometimes) getting caught as well as many other interesting, live entertainment during the Black Friday weekend.

The most blatant thievery I have witnessed was a customer I noticed had my company’s (when I worked for a manufacturer) speakers in his basket. I saw him reading the box so I assumed he had questions about it I could answer. I told him I worked for that company and would be able to answer any question he had on the product. He politely told me he was did not have any questions about the speakers. About 45 minutes later I was near the front of the store helping out a return agent with a customer who was returning my company’s product. I saw at the corner of my eye the customer who had my speakers in his basket (the speaker box was huge, about 3 feet long by 1.5 feet wide, rectangle-shaped) which weighed over 40 pounds. So it was not anything he could easily conceal. He proceeded to slowly but swiftly stroll out the front door with the speakers in his basket as if he was doing no wrong. No employee even noticed him despite him walking at a slow pace. I found and told a couple of loss prevention employees about it. They ran out the store to catch him but he was long gone, nowhere to be found by then.

[adblockingdetector id=”4″]I have witnessed amazing salesmen who could switch a customer’s buying decision from the very low priced computer in the Ad to one that is almost twice as expensive. They do this as if they have special Jedi Mind Trick powers. This one Jedi sales master that I will call “Charles” sold an expensive computer to a customer on the premise that he personally owned one and it works very well despite the customer being set on purchasing the lower priced one in the advertisement. During the same weekend the customer returned to ask for assistance on purchasing an accessory for it. As he walked behind Charles he overheard him giving the exact sales pitch on a completely different computer to another customer. He was obviously pissed and walked away. In reality Charles did not even own a computer but could sell them amazingly well.

I just thought I’d give a couple of retail stories I had which happened during Black Friday weekend sales. Everyone, be safe and don’t be sold a replacement product you didn’t come in the store for if it is not close to the deal you really wanted. Happy Black Friday Sales weekend!
[adblockingdetector id=”6″]If you have a question on Black Friday Sales Weekend, Black Friday Ad items, or if you have any comments feel free to ask below in the Comments section.