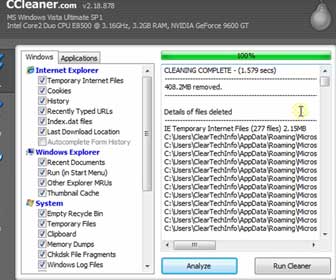 CCleaner or as it was originally called, “Crap Cleaner” is a program that is 100% free to download and use. It allows you to easily delete unneeded files on your computer that is taking up valuable hard drive space. Freeing up hard drive space will allow you to install more programs or files.

[adblockingdetector id=”1″]CCleaner will also clean up unneeded Windows Registry entries. But I STRONGLY ISSUE A WARNING against ever messing with your Windows Registry. Deleting just 1 little file could permanently take down Windows on your PC. FOLLOW THE REGISTRY TUTORIAL PORTION AT YOUR OWN RISK!

CCleaner has some bonus features like the display of your PC hardware information and an integration of your built-in Windows Uninstaller. I recently cleaned Internet cache, cookies, temporary Internet files and other unneeded files from a computer. The cleanup process of just the browser cache, cookies and temporary Internet files took about 80 minutes to complete. Part of this was due to the CPU speed (mid-end Intel P4) and only 512 MB of RAM. But a big part was due to the fact that the browser junk on this computer had never been cleaned since it was purchased about 3.5 years ago. If this computer was cleaned and optimized at least every two months it wouldn’t have taken more than 3-5 minutes to complete. The computer also suffered from some system errors that I could not fix. It was ultimately reimaged (all the computer data and Windows was wiped out and everything was brought back to the original state it was in 3.5 years ago).

[adblockingdetector id=”5″]The story above is just one of many scenarios in which the use of CCleaner at least every other month would have helped a computer. I am sure some would argue with me about the usage of the program and would say 2-3 times per month would be better. They might be correct, but for the lazy people out there every two months should be fine.

In the following CCleaner video tutorial I will take you step-by-step and you will easily learn the following…
1. How-To Find, Download and Install CCleaner from www.CCleaner.com
2. Explanation of a bonus feature of the program that allows you to view specific and accurate data on your current Operating System, CPU, RAM and Video Card
3. How-To clean/delete Internet Browser junk, unneeded Windows System files and more with just a couple of clicks
4. Warning about the following Windows Registry portion. Use at your own risk!
5. How-To clean up your Windows Registry in just a few clicks
6. How-To backup your Windows Registry before you alter it
7. Brief tour of extra options. One of them is the Integration of the Windows Uninstaller