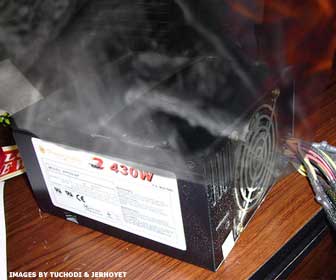 About 7 years ago I was playing a game on my Windows computer that I built the previous year. I was having a great time playing a First Person Shooter game (forgot which one, I have played so many) online against other people. All of a sudden I heard a loud “POP!”, actually it sounded more like a mini explosion.

[adblockingdetector id=”1″]My computer screen immediately went blank. The computer powered off. I had no clue where the sound came from. I thought at first it had something to do with the breaker or electrical circuits in my home. But that couldn’t be the issue since the lights were still on in my room and my monitor was still powered on despite the lack of PC signal. I smelled something burning and saw smoke coming out of my computer.

I immediately flipped the power button on the back of the computer to the off position and pulled out the power cord. I pulled out all of the connections in back of my computer, placed it on top of the kitchen table and took it apart. I narrowed it down to the power supply. I discovered the smell and smoke originated from it. I purchased a new power supply and hoped that no other component on my PC motherboard was damaged.

I swapped out power supplies and turned on the computer for the first time since the power supply blew up. The PC powered up perfectly which was a great sign that told me no other hardware component was damaged, everything else working fine.
[adblockingdetector id=”3″]