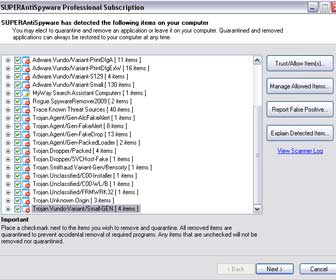 I had honestly never heard of SUPERAntiSpyware before I was contacted by a representative (Mike) to review the product. I was a bit skeptical as to how well it works (according to website claims) but I am always willing to try something new and different from what I am used to. I handle all advanced virus, malware, spyware, etc. removal at my job. I decided to install SUPERAntiSpyware on my virus removal workstation and put it to the test.

[adblockingdetector id=”2″]Versions, Pricing and PC Compatibility
There are two different versions, “SUPERAntiSpyware Professional” and “SUPERAntiSpyware Free Edition”. The differences between the two are listed here. The price of the Professional version is $29.95 USD which includes a year of free updates. An additional $9.95 USD will give you a lifetime of free product updates (as opposed to $14.95/year).

Installation, Testing and Performance
SUPERAntiSpyware Professional installed fine, without any problems. I was able to run the real-time protection alongside the Kaspersky Anti-Virus 2009 real-time protection without them fighting or calling each other a virus which sometimes happens with similar security programs.

After a week passed I had scanned various computers with it. I learned that it not only removes spyware, malware and adware but it also goes a step further and removes some viruses which other programs in its category I have tested do not do.

A few days later I received another laptop that was infected. This time SUPERAntiSpyware failed to detect a malware threat named “Antivirus System PRO”. Anti-Malware detected and removed it perfectly.

Even though the two programs should not be compared just for the fun of it I pitted Kaspersky Anti-Virus 2009 vs SUPERAntiSpyware on another digital-parasite infested computer. SUPERAntiSpyware detected 2 “Trojan.Agent” threats that Kaspersky missed. They were “Gen-FraudDrop” and “Gen-IE FakeAlert”. Kaspersky IMO is the best Anti-Virus product on the market. This just proves that even though you have a really good Anti-Virus scanner/remover you still need a good malware, spyware, adware, etc. remover.

SUPERAntiSpyware did perform a full / thorough PC scan faster than Malwarebytes’ Anti-Malware but the specific numbers are not valid since I was performing various other PC tasks while both scanners were running.

Final Thoughts and Rating
SUPERAntiSpyware is a good product. Even though it detects and removes a lot of malware, spyware and adware threats, like all similar products it is not perfect and does not claim to be an anti-virus scanner. So you should always run it on a computer with a good anti-virus program (like Kaspersky or NOD32).
[adblockingdetector id=”3″]

My Rating of SUPERAntiSpyware is 4 out of 5 Mouse Pointers