Call of Duty: World at War PC Patch v1.6 Download is out! 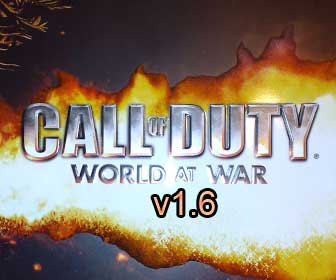 * 3 new Multiplayer maps: Battery (mp_drum), Breach (mp_bgate), Revolution (mp_vodka)!
* New Nazi Zombie map: Der Riese nazi_zombie_factory, an all-new Zombie map set in a secret Nazi research facility featuring the Pack A Punch Machine, Teleporters, and many more undead hordes!
[adblockingdetector id=”2″]* Exploits pertaining to Demo playback.
* Favorites list now ignores filter settings.
* Fixed S&D round counting error when round limit is reached.
* New feature: in-game Add to Favorites.
* Friends list: green online indicator.
* Starting the game in Safe Mode will no longer toggle the “Soften Smoke Edges” graphic option.
* Fixed various crashes.
* Mods: Client will no longer join a modded Co-op server via Game Invite unless they have that mod loaded.
* Mods: Client running a mod will be asked to unload the mod if they attempt to join an unmodded server.
* Mods: All single player levels can now be run with a mod loaded. I played the new Nazi Zombie map (Der Riese) and it is top-notch.
*A new knife has been added that you could purchase for 3,000 points (it is a Bowie Knife I believe).
* There are also telporters in a few spots that send you to a centralized location (Main Frame). Near the Main Frame there is a weapons upgrade machine. For 5,000 points you can insert any weapon inside it and it will increase its strength.
* The Zombies now have the ability to climb over fences and walls. So you really have to watch your back during the double-digit rounds.