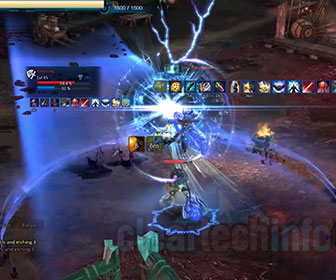 The new Gunner class in Tera Online seemed really cool when I saw a preview of it. Being an FPS gamer and loving games like Call of Duty, Crysis and Wolfenstein the new Gunner class was especially intriguing to me. I was happy to hear that Tera was giving away one free “Additional Character Slot” if you logged in during the day of the launch. So I had no excuse not to play the new class.

[adblockingdetector id=”1″]I was not disappointed playing Gunner. I have been playing Tera since 2013 and this has quickly become my favorite class. I had so much fun leveling and doing lowbie dungeons. What I didn’t expect is that my favorite part of being a Gunner is would be participating in Tera’s Open World PvP. Of course I had the 65 kids 1-shotting me while leveling, but I expect that while leveling with any class. But when someone attempted to PK (“player kill”) me that was near my level I had the most fun playing Tera since I started in 2013.

I leveled my Gunner on the Mount Tyrannas Tera server. The problem with this is that all of my geared toons, guild and friends are on the Valley of Titans sever. So I had to tread lightly when I started power leveling in the Devan mob area since it is so crowded. I picked a little corner with a couple of mobs and killed them, waited for the respawn then repeated my actions. But the trolls that were in parties didn’t even want to let me have a few mobs and PK’d me or sent their level 65 friends to PK me.

Most people would get discouraged or angry, but not me. This was actually fun, yeah I know, I am weird, haha. Since they were picking on me I trolled them back by leaving my corner and going into the denser mob area to farm their mobs even though it was “their” spot and “their” mobs. I was going to get killed anyway, so might as well have fun pissing them off before I died, LOL. Since I had nobody to help me on the MT server I had to learn how to play my class decently so I could defend myself against people that were trying to kill me.

[adblockingdetector id=”5″]I started getting decent enough to fend off people around level 52. Not sure why that exact level, I just noticed I was not as horrible as I had been during levels 1-51. I was like the “Worst Gunner N/A” during levels 1-51, now I am probably just like #20 on the Worst Gunner N/A list. Watching the videos below I noticed how many mistakes I made, all the abilities I forgot to use and all the buffs/pots I should have used. I am currently level 65 with Idoneal newbie gear on and will be running Bathysmal Rise to get better gear. Hopefully next month I will be getting Defiance and Renegade PvP gear, I really need it. As level 65 I am getting a backlash from all the people I defended myself from and ended up killing. They are soooo mad, hahahaha. Yesterday I even had 4 people from different guilds team up against me in open world to make sure they killed me. At least one of them was in full Defiance. All this recognition I am getting as being an annoying PK killer is making Tera open world PvP so much fun, seriously, hahaha xD