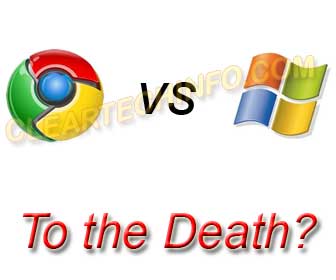 Sundar Pichai of Google recently announced the new Google Chrome operating system. Not to be confused with the Google Android operating system which was created for mobile devices like your cell phone. Sundar takes throws a punch at Microsoft Windows by saying, “…operating systems that browsers run on were designed in an era where there was no web.”

[adblockingdetector id=”1″]The Google Chrome operating system will be built on top of a Linux kernel. But it will not look or feel like any versions of Linux out today. Google promises to focus on three aspects for their future operating system, “speed, simplicity and security”. Supposedly you will be able to startup and be on the web within a few “seconds”? I seriously double this means you will be able to power up your computer and then get on the web within a few seconds. The Google Chrome OS will probably have a Sleep mode like Windows XP and Vista. Starting up from Sleep mode and being able to browse the web within a few seconds is definitely achievable since your computer is already turned on, it’s just set to a low power consumption Sleep state.

The operating system will be designed from the ground up to minimize and possibly eliminate any virus or malware threats. This is very interesting and I will have to see this to believe it. I do believe it will be a LOT safer to use (in regards to viruses and malware) because it will be an open-sourced operating system unlike Microsoft which is closed-source. What this means is just like most Linux OSs, any programmer from around the world will be able to help program and create the new Google Chrome OS. They don’t have to be Google employees at all. It could be a genius high school kid from a country outside the USA that has a great idea on how to program certain aspect of the OS.

The future of applications for the Google Chrome OS will be web based. When developers create an application for the OS it will be programmed to work within your web browser. It will not only work within the Google Chrome browser it will work in most other popular browsers like Firefox, Opera and Safari. Google also promises to make the installation of hardware devices a lot less painful by minimizing the time and effort needed to install a hardware device. I am assuming they will concentrate on doing something similar to the Mac OS where you just plug in a device and it works.

If you are as excited to see the final product as I am you will be disappointed to hear that it will not be out until the second half of next year. It will initially be available for Netbooks (those “cute”, little, mini laptops that you see people using). No official date for a final PC release has been announced. Future update for this project will be announced during the Fall of this year.
[adblockingdetector id=”3″]